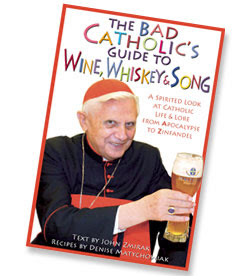 I recently came across recordings of Hillaire Belloc singing and it made me think about the lost art of bar singing and whimsical versification. So I've been trying to write very, very light verse every day as a sort of grown-up recess activity. Here's the latest:

I have a notion that this nation sorely needs to hear
more songs that are inspired by the drinking of good beer.
Not the raucous rock songs a piss-drunkard sometimes bellows,
but rather rousing choruses from blokes and their good fellows.

Seriously, though I think it's high time for a national pub singing movement. Local chapters could be called wePods and meetings could consist of singing and drinking beer and burgundy (but not too much). Every week the lad with the most original/most singable song gets to drink for free.

In the spirit of this, I've composed a drinking song about a man who's been betrayed by his chum:

Here are some other poem-ettes I've written recently:

A Little Exercise
This is a little excercise
that I have under taken--
to practice writing verse until
the habit can't be shaken.

I wish to speak in couplets
and pithy epigrams
so that a rhyming rhythym
will capture who I am.

Two Men
The man who lives in ignorance
(through no fault of his own)
can claim a primal innocence
from sins he might have known.

But we call that man foolish
who will not seek wisdom.
'Cuz ignorant or schoolish,
an unwise man is dumb.

Bedtime
Going to bed at three,
is often a pleasure for me.
But getting back up at 6:30
makes all of my bones start to hurty.

Balls
I have so many balls up in the air
that I can't take the risk of looking down.
So even though I'm juggling with care,
I sometimes slip on marbles on the ground.

Now, remember: these are not meant to be good or profound--they're meant to be recess. Also, I'm pretty sure they'll sound better after a few drinks. The image above is from these guys.

I'm posting every couple of weeks at a great new, local Catholic blog called Catholic Phoenix. Here's a link to my latest post .

Gemma at the Zoo

The other wild one

Guess who my favorite author is.